Our new FLUX™ Battery Recombination Caps virtually stop water loss! Now you can avoid the chore of adding water to your battery for months or even years!

Previously, you may have chosen a VRLA battery based on its advantage of low maintenance. But with the advent of the FLUX™ recombination cap, more choices are now available. The FLUX™ vent is a game-changer because it almost eliminates maintenance on a vented battery. It now makes sense to choose a VLA battery which has the advantage of lower costs and longer life.

This amazing vent cap saves time and pays for itself! Simply replace the existing battery caps with our FLUX™ vent. The water that normally escapes in the form of gas is recombined back into water and retained in the battery. The FLUX™ vent virtually eliminates the emission of hydrogen and toxic acid fumes. Lower utility bills and equipment costs can result because there is no need to provide mechanical ventilation. This is true even when the batteries are installed in living spaces or enclosed areas.

To buy, select a FLUX recombination cap model in the drop-down box below. Then enter the desired quantity and select the Add to cart button. Then select the Checkout button that appears at the top left.

How much water does it save?

Wow! That was our reaction when we saw the test results. The batteries in the independent lab test were tested with a full discharge/recharge cycle once per day. This was done to reveal how much water is saved. Most of the water loss takes place when a battery is being charged. Thus, if you do not charge your batteries every day, the water savings you get will likely be much greater. This is shown in the chart below. It compares how much water is saved in relation to how often the batteries are charged.

All lead-acid batteries produce hydrogen gas during recharging. This gas is very flammable and will likely explode when lit. If the flame enters the battery, the gas can ignite and explode, propelling battery pieces and acid in every direction. The FLUX™ recombination cap neutralizes the hydrogen by combining it with oxygen and converting it to water. In addition, every FLUX™ battery cap contains a flame arrestor for added safety.

How does a battery lose water?

There are basically two ways in which a battery loses water. The first way is through evaporation caused by warm air and internal heat caused by the battery itself. Although the electrolyte is a mixture of both sulfuric acid and water, only water is lost. This is because the acid does not evaporate except for a few molecules that cause an odor. Therefore, only distilled water should be added to a battery.

The second way that a battery will lose water is caused by electrolysis which takes place when a battery is charged. Electrolysis is the splitting of water into hydrogen and oxygen gas caused by the passage of an electric current. Normally this gas is allowed to escape from the battery and in time it must be replaced. If this is not done, the internal plates will dry out and the battery will be ruined.

How does the battery recombination cap work?

The FLUX™ recombination battery cap reclaims the battery’s water vapor and the water that was split into gas. It does this in a two-stage process.

The first stage employs our Water Miser technology which acts as a trap to condense the water vapor into drops. This returns much of the water that would otherwise be lost back into the battery.

Next, the second stage uses a catalyst to recombine the gas into water. Therefore, virtually all the water that is normally lost is now captured and returned to the electrolyte tank. 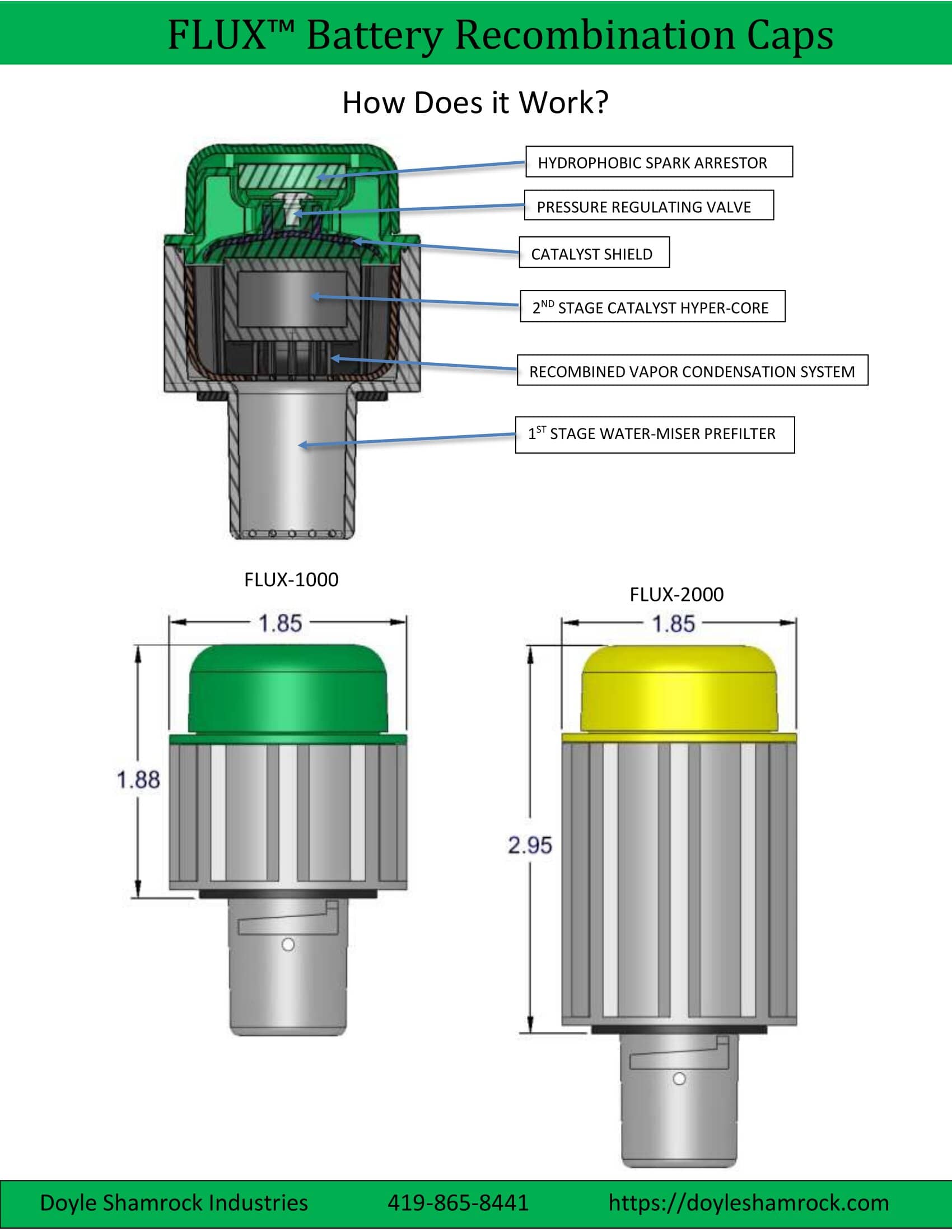 You may view the above drawing as a PDF file, and it shows how the battery recombination cap works. Please check the free space above your batteries and then compare it with the dimensions shown above to make sure it will fit before you order. The line drawings for the FLUX-1000 and FLUX-2000 may also be viewed.

It will fit most battery brands, including Crown Batteries, Interstate Batteries, US Battery, Rolls Batteries, Trojan Batteries, Exide Batteries, and more. The FLUX™ battery recombination vent cap will replace any standard quarter-turn bayonet-style vent cap, see below. To make sure it will fit on your battery, just compare your old vent cap measurements with those shown here. 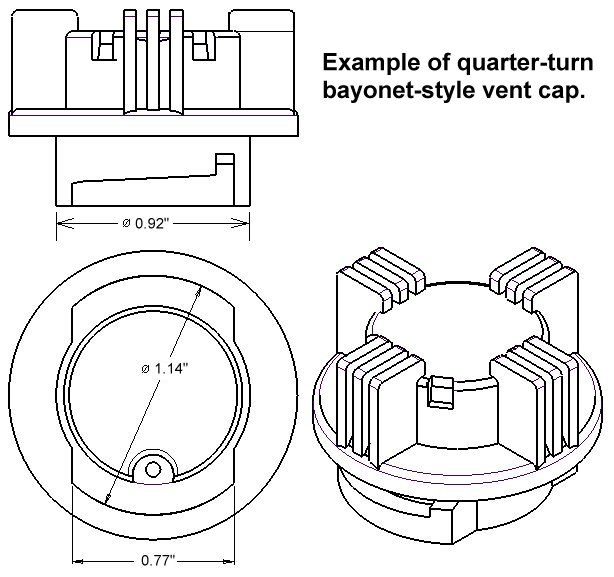 The design of battery recombination caps has a long past. Ever since the lead-acid battery was made, there have been many attempts to fix the problem of water loss caused by electrolysis and by evaporation. Electrolysis takes place during charging and consumes the water in a battery by converting it to hydrogen and oxygen gas. Normally this gas is allowed to escape from the battery by venting itself through the battery caps. The thought to convert this gas to water by using a catalyst or other means has been an elusive goal.

In 1911, Thomas Edison came up with the thought of recombining hydrogen and oxygen gas in a lead-acid battery.[i] His thought was to ignite the gas mixture by heating it with a wire. This process converts hydrogen and oxygen gas into water. The recombined gas forms water vapor which condenses into drops. These drops then fall back into the battery jar, thus reducing the work and time needed to refill batteries with water.

Ways to limit water loss further progressed when the first lead-acid gel battery was made in 1934.[ii] Adding silica to the sulfuric acid produced a gel electrolyte that is less prone to evaporate. However, the main advantage of electrolyte in gel form is that it made the battery less prone to leakage.

A Battery Recombines Gas Into Water

The thought to recombine battery gases took a leap forward in 1957 when Otto Jache made the first true VRLA (valve-regulated lead-acid) battery.[iii] This type of battery is fully sealed except for a small pressure relief valve in the battery case. The hydrogen and oxygen gas are kept in the battery where the two gases are combined. The valve is a safety feature that lets the trapped gas escape if the pressure in the battery is too high. Any gas that leaves the battery results in a tiny bit of permanent water loss. However, this rarely takes place during normal conditions and most of the gas recombines to form water. As a rule, most VRLA battery valves are made to release pressure at a set PSI to make sure that full recombination takes place.

A few battery recombination caps have been made with some degree of success. In 1926, Claud Everett sought to stop the water loss and the resulting wet top surface of the battery.[iv] He made a battery cap filled with glass wool on which moisture would condense. When plugged into the battery vent hole, this reduced the amount of water lost due to evaporation. However, it did not really recombine the gas, nor did it stop it from leaving the battery. Therefore, his vent cap just had partial success.

In 1929, Dean Davis tried to improve on what Thomas Edison did. He made a battery plug that also used a wire to change the gas to a liquid.[v] The wire catalyst was powered by the battery itself and used a mercury switch to power the wire. When the gas pressure in the battery rose, this caused the mercury to rise and touch the wire, thus completing the circuit. To absorb moisture, spun glass was put in a space in the recombination plug just below the catalytic chamber.

In 1933, Harry Guthrie of the U.S. Navy made a “self-watering” battery. It used a catalyst in place of using a hot wire.[vi] His thought was to combine the battery gas at a lower temperature. That may have been no help since the recombination process itself made heat. To solve this, he devised a way to cool the space close to the catalyst. At the same time, he was faced with another snag. When the catalyst is wet, it stops working. To restore the catalyst to its former state, heating elements were used to dry it out. This restored its power to start the recombination process.

In 1946, Palmer Craig made a sealed battery with a way to merge the battery gases to form water.[vii] This would be used on submarines or other venues where the gas cannot be allowed to pollute the air. The patent paper mentions a way to remove excess water from the catalyst, and two ways of doing so are mentioned. The first one compacts the recombination media to remove most of the water. This involves pressing a shaft on the top of the battery to squeeze the catalyst. The rest of the moisture is then removed by means of an electric heater. This might be done by attaching wires to the battery, flipping on a switch, then switching it off after it dries.

Another milestone was reached in 1949 when Palmer Craig made another battery cap.[viii] It was made to replace the OEM battery cap with the goal of reducing the need to add water to the battery. The space below the catalyst was filled with glass wool and was designed to form a water trap. The space on top was filled with another substance to help the catalyst do its job.

As noted, when the catalytic part is wet with recombined moisture, the recombination power of the catalyst was lost. A way to dry out the catalyst is outlined in the patent claim. A heating wire is put by the catalyst tank and is controlled with a switch. To stop the catalyst from becoming wet, the top of the recombination cap was shaped like an inverted cone. As a result, the water drops flow outward instead of falling on the catalyst, thus helping to keep it dry. The recombined water then flows down the side of the vent cap wall and then drips back into the battery.

Another goal of this vent cap was the fast transfer of heat away from the catalyst. It is transferred to the outer wall of the battery cap where it then goes into the air. This was done by means of a highly conductive substance such as copper or other metals.

In 2016, Michael Doyle and Drew Barrett applied for a patent for improved battery recombination caps. This was granted in 2018 and was assigned patent number 10,601,010.[x] The plan was to defeat the flaws of other brands now on the market. In this regard, one of them would sometimes catch on fire and melt. Hence there was a need to make one that will not cause this issue. This vent cap also has a safety flame arrestor. That will stop the battery gas in the vent cap from being lit by a nearby spark or flame. More info may be viewed in the brochure.

The first intent for our battery recombination caps was for use on batteries that do not move such as solar battery arrays and backup batteries. However, one RV owner put them on the 6-volt batteries in his motorhome and was pleased with the results. He drives the RV between four and five days per week, so the batteries are used on a regular basis. About 15 months after installing them, he checked the water level and said he could not tell if the battery had lost any water. He said that if he had to guess, they may have lost about 1/8 inch of water at most, and he was confident the batteries could go at least two years without adding water.
____________________________________________