What causes positive plate growth in a battery?

As lead-acid batteries age and are subjected to years of charge and discharge cycles, deposits slowly form on the positive plates. This process is commonly referred to as corrosion or oxidation. In time, this causes the plates to expand. As a result, positive plate growth occurs which causes the positive terminal post to rise. As the post grows upward, this can distort the top of the battery case and cause it to bulge at the terminal. This can ruin the battery if it cracks the cover or breaks the seal around the post, see the picture below. 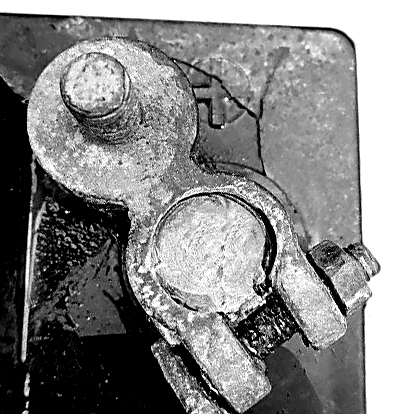 Battery plates are made of various lead alloys. Pure lead is not used because this metal is too weak to support the weight of the plate grid structure. Other metals are mixed with the lead to strengthen it and enhance its electrical properties. These metals commonly include antimony, calcium, tin, and selenium. The percentage of each metal in the alloy is varied depending on the application. For example, a deep-cycle battery usually contains more antimony than starting batteries. Regardless, positive plate growth occurs in both types of batteries. Although battery manufacturers use different methods to slow the rate at which positive battery plates grow, this cannot be eliminated. However, since this process occurs very slowly, the battery will likely reach the end of its useful life before the plate expansion ruins the battery.

What should I do if my battery plate is growing?

Generally, this growth does not become apparent until after the battery is more than five years old. If it occurs earlier than this, the accelerated expansion may have been caused by improper charging or other preventable factors. If the plate growth has already become evident, not much can be done. However, following the recommended instructions provided by the battery manufacturer will minimize the rate at which the plates continue to grow. Additional helpful guidance is given on this website.

Can positive plate growth be prevented?

Although positive plate growth is normal and cannot be stopped, it can be minimized by following the guidelines listed above. To prevent it from damaging the battery, some manufacturers install a floating lead bushing, see the picture below. This is done instead of attaching the terminal post directly to the cover. The floating lead terminal bushing prevents the plate growth from warping the top of the battery by moving upward along with the lead post. This bushing has two rubber O-rings on the diameter to maintain the seal against the battery cover. Since the floating bushing can move independently in relation to the battery cover, it prevents the positive plate growth from damaging the top of the battery.